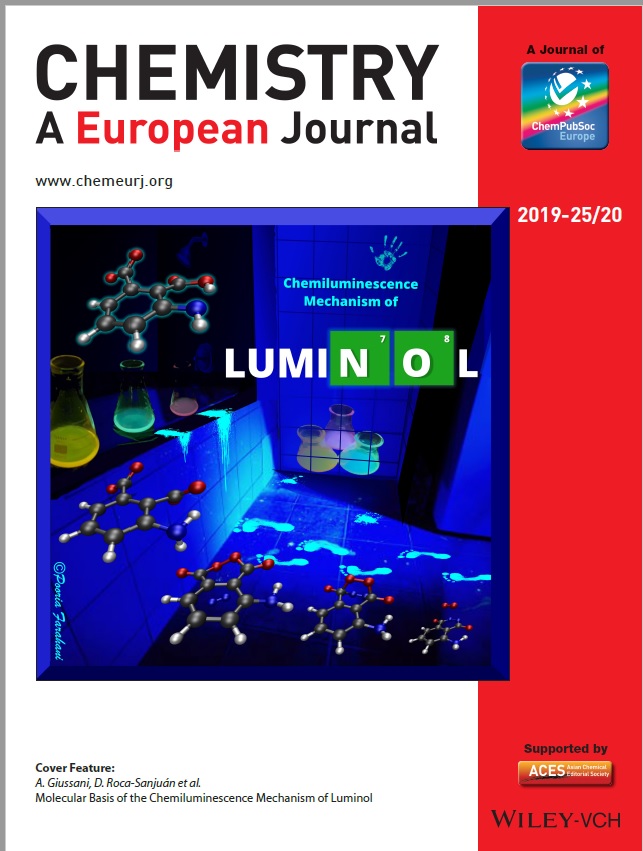 Quantum‐chemistry determinations of the luminol chemiluminescence mechanism have made it possible to: first, clarify the spin inversion of the reaction; secondly, to determine the concerted nature of the two steps of 3O2 addition and 1N2 elimination; thirdly, to answer why such oxygen by nitrogen substitution must occur for an efficient excited‐state population; fourthly, to describe the electronic‐structure properties of the chemiexcitation; and finally, to distinguish the paths producing light emission versus those giving rise to radiationless decay. More information can be found in the Full Paper by A. Giussani, D. Roca‐Sanjuán, et al. on page 5202. 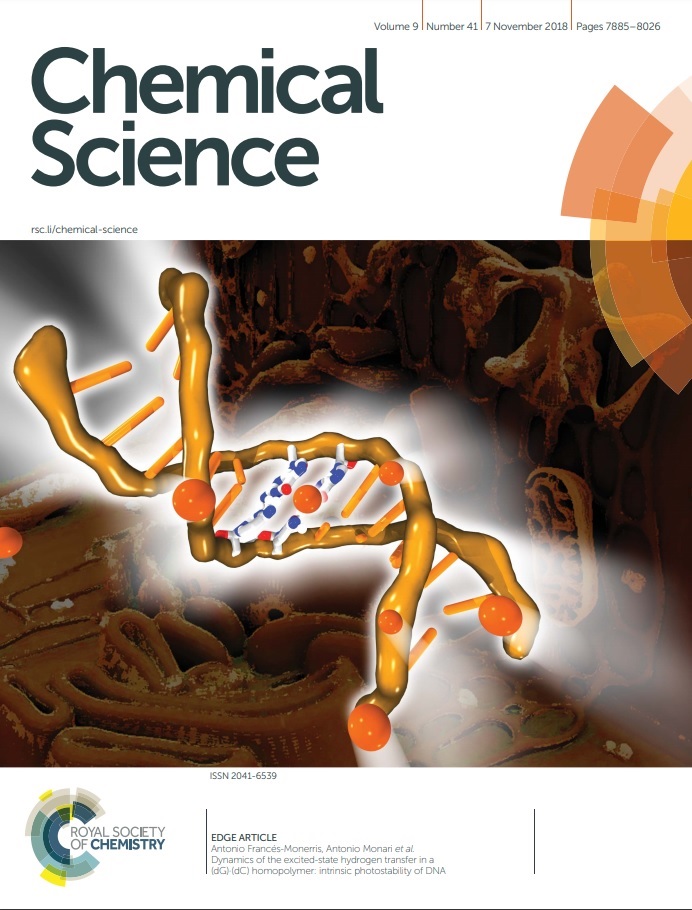 Dynamics of the excited-state hydrogen transfer in a (dG)·(dC) homopolymer: intrinsic photostability of DNA

The intrinsic photostability of nucleic acids is intimately related to evolution of life, while its understanding at the molecular and electronic levels remains a challenge for modern science. Among the different decay pathways proposed in the last two decades, the excited-state hydrogen transfer between guanine–cytosine base pairs has been identified as an efficient non-reactive channel to dissipate the excess of energy provided by light absorption. The present work studies the dynamics of such phenomena taking place in a (dG)$(dC) B-DNA homopolymer in water solution using state-of-the-art molecular modelling and simulation methods. A dynamic effect that boosts the photostability of the inter-strand hydrogen atom transfers, inherent to the Watson–Crick base pairing, is unveiled and ascribed to the energy released during the proton transfer step. Our results also reveal a novel mechanism of DNA decay named four proton transfer (FPT), in which two protons of two adjacent G–C base pairs are transferred
to form a biradical zwitterionic intermediate. Decay of the latter intermediate to the ground state triggers the transfer of the protons back to the guanine molecules recovering the Watson–Crick structure of the tetramer. This FPT process is activated by the close interaction of a nearby Na+ counterion with the oxygen atoms of the guanine nucleobases and hence represents a photostable channel operative in natural nucleic acids. 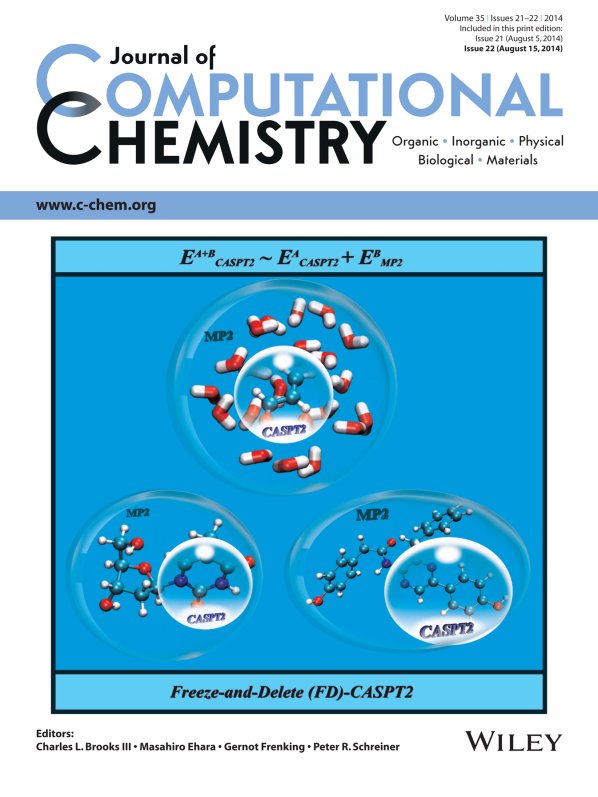 On page 1609 (DOI: 10.1002/jcc.23666), Pooria Farahani et al. present a new approach for calculating dynamic electron correlation effects in large molecular systems using multiconfigurational second order perturbation theory (CASPT2). The method is restricted to cases where partitioning of the molecular system into an active site and an environment is meaningful. Only dynamic correlation effects derived from orbitals extending over the active site are included at the CASPT2 level of theory, whereas the correlation effects of the environment are retrieved at lower computational costs. 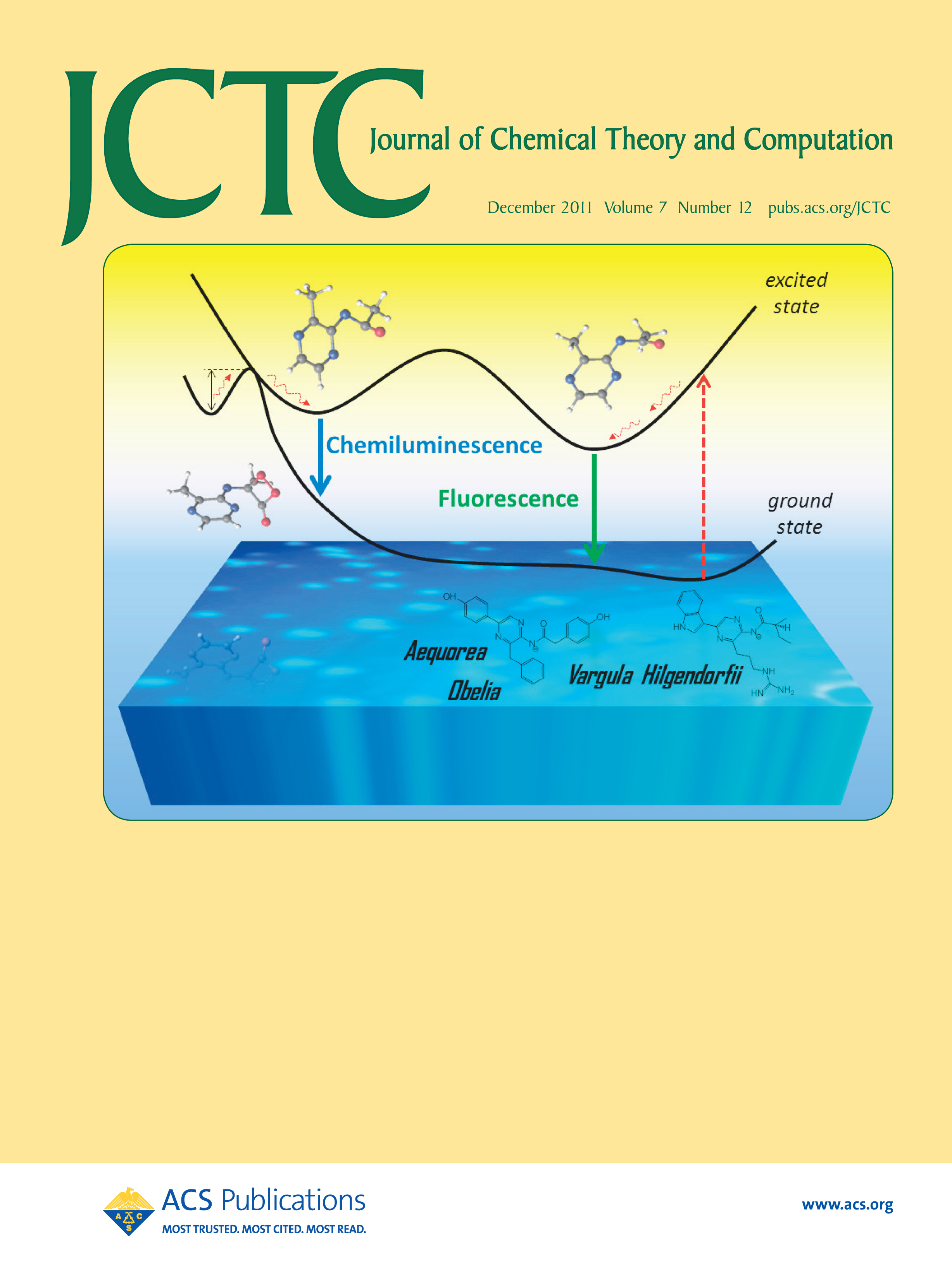 Excited-state potential energy surfaces are often more complex than expected. The excited-state equilibrium minima responsible for the fluorescence and chemiluminescence phenomena in a small model for coelenteramide and Cypridina oxyluciferin have been found to be different. Such molecules are the light-emitting species in the Aequorea, Obelia, and Vargula hilgendorfii marine bioluminescent organisms. On the basis of the findings, some recommendations are given for future theoretical and experimental investigations on chemiluminescence and bioluminescence. See D. Roca-Sanjuán, M. G. Delcey, I. Navizet, N. Ferré, Y.-J. Liu, and R. Lindh, pp 4060—4069.

“The Chemistry of Bioluminescence: An Analysis of Chemical Functionalities”.
I. Navizet, Y.-J. Liu, N. Ferré, D. Roca-Sanjuán, and R. Lindh,
ChemPhysChem. A European Journal of Chemical Physics and Physical Chemistry, 12, 3064-3076 (2011)

The chemical functionalities of the bioluminescence phenomenon have been rationalized in the last decades via systematic studies from small to large-size molecular models, as reviewed by R. Lindh et al. on p. 3064. Electron-donating chemical groups conjugated to peroxo moieties are the molecular structures that intrinsically holds the optimal electronic properties for the process, whereas the surrounding enzymes mainly account for color-tuning.

Some of the new unique features of the MOLCAS quantum chemistry package version 7 are presented in this report. In particular, the Cholesky decomposition method applied to some quantum chemical methods is described. The report further elaborates on the implementation of a restrictive-active space self-consistent field reference function in conjunction with 2nd order perturbation theory. The average atomic natural orbital basis for relativistic calculations, covering the whole periodic table, are describe and associated unique properties are demonstrated. Furthermore, the use of the arbitrary order Douglas-Kroll-Hess transformation for one-component relativistic calculations and its implementation is discussed. Moreover, the ElectroStatic Potential Fitted scheme, a version of a quantum mechanics/molecular mechanics hybrid method implemented in MOLCAS, is described and discussed. Finally, the report discusses the use of the MOLCAS package for advanced studies of photo chemical phenomenon and the usefulness of the algorithms for constrained geometry optimization in MOLCAS in association with such studies

We present here the results of time-resolved absorption and emission experiments for 4-dimethylaminobenzonitrile in solution, which suggest that the fluorescent intramolecular charge transfer (ICT) state may differ from the twisted ICT (TICT) state observed in transient absorption.